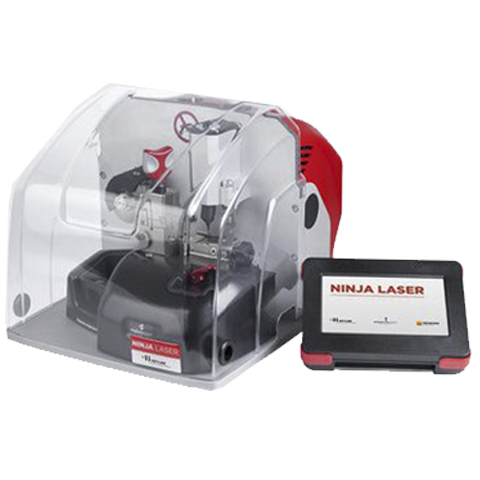 Chapter Two: The Creation and Progression of the Electronic Key Cutting Machine

When Camillo and I started designing the concept for an electronic key machine to generate car keys by code back in 1987, computer technology was still not accessible for key machine manufacturers.

We created a software model to include all the depths and spaces of all the car key codes and models on the globe; however, we still had to reduce the size of the electronic boards that controlled the axes of the key machine. But that was not our biggest challenge.

When we introduced the machine onto the market, the only way to control it at locksmith level was with a personal and possibly portable computer – a laptop.

At that time there was only one computer available for this purpose – Zenith. We made an agreement with them to have a computer named ‘lunchbox’ to be sold at a special price for our customers.

In these years I was travelling with my friends and demonstrating this novel, new concept of carrying a computer in a briefcase and a code machine as secondary luggage on a plane. Most of my customers were astonished to see the ‘Electronic Code Program,’ and how it functioned coupled with the ‘Uno Code Machine.’

We spent much of our time teaching the basics of computer science applied to key cutting, but we had fun with it and were excited about being innovators in an industry which had changed little over the decades and was used to its own traditional ways. That was the beginning of a new era.

We started shipping the first electronic machines in 1988 and it slowly but surely became a commercial success.

The machine was created for electronically cutting vehicle keys by code, but we soon realised it was the ideal tool to create systems for cylinder locks as well; for the keyed alike, keyed to differ and complete master key systems, which were all created manually at the time. Adding this new feature just drove our customers’ enthusiasm all the more. The incredible part was that we had virtually no competition at the time; we were the complete innovators of this new technology.

The obstacle, as I said, was explaining this new equipment. Teaching the locksmiths about it’s methods, explaining it’s commercial uses and services and putting together an offer which had to include the update of the key code software – both for cars and cylinder locks.

The product line soon extended with the presentation of an electronic machine to cut bit, double bit and pump keys, followed by a more sophisticated machine for dimple and then laser car keys. Each one included a full package of information to cut keys by code, plus the advantage of correcting the duplicated keys using a limiter that took them to the original manufacturers’ specifications. In a nutshell, a locksmith did not have to deal with precision or worn keys anymore; the machine was automatically fixing all of these issues by making each key as an original key.

Soon to follow were extra features such as, the automatic feeder, the robotized jaw and the pneumatic feeding and discharge, each one complementing a machine which, after all, still had to remain very simple for the key cutter and the locksmith to use.

To hear the rest of Massimo’s story and learn all about the beginnings of Keyline, check out the next edition of Cars, Keys and Locks and look out for Chapter 3: Keyline.