How to Site Read a VAG Laser Key 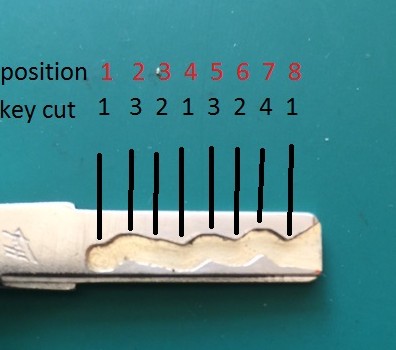 A very common VAG laser key for the locksmith as it’s fitted to almost the entire range of VAG vehicles, from 1998 models right through to 2014. There are 3 generations of this lock but the site reading remains the same for each. 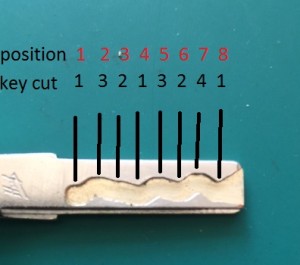 You always read the same side of the HU66 key – the top track if the bow is to the left and the tip to the right. The cuts are easily read as all 4 heights are easily identifiable.  But, if you are unsure, you can use Callipers/Vernier’s to measure the heights using the below table:

Use Vernier’s to measure the cut as shown below:

This is a very straight forward key to read and decode by eye.

The Kessy System is used for models fitted with the generic first cut on a 9 cut VAG laser key.

This 9th cut is only used in the ignition lock and is not used in the door lock, so Lishi will still pick and decode the door lock as normal. Enter the cuts into your cut to code machine selecting the correct key series and the machine will automatically cut the generic extra cut for you, in the correct position.

The generic extra cut is always the first cut nearest the bow of the key. 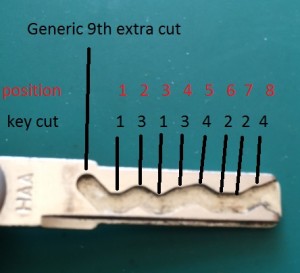 You can clearly identify the generic cut in the photo; the machine cuts this for you after you’ve entered the 8 key cuts. The 8 key cuts are read in the exact same way as the traditional HU66 key, using either site read, by eye or Vernier’s.

Each cut has a different height – again with the bow to the left and the tip to the right, you site read the top track of the key.

It is still, in effect, exactly the same as the standard HU66 key, the generic cut operates a switch in the ignition so it is not a key cut as such, but is a generic cut on all models fitted with the Kessy system.

The new key profile throws up some new challenges; with no key rules and no key information having yet been released, it’s very difficult to be 100% accurate with details given on this key.

Based on what information we have managed to gather, it seems that VAG have now gone for the use of inverted wafers similar to the PSA and Renault VA2/VA6 keyway used on the Clio 3 models. 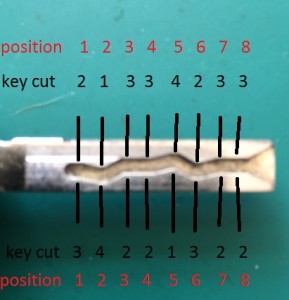 We can see that because of the inverted wafers, the Lishi tool is reading the positions differently.

The lock is a 2 up, 2 down configuration; so, when reading the key the same way as it was picked, each position is being read as follows:

NOTE: It is an impossible key to give an accurate decode and site read on until the key rules and series information is available.

And it’s all changed again with the 9 cut lock, which uses 3 side cuts in position 1 to 3, with corresponding conventional cuts.

NOTE: The door lock uses side cuts in these positions but the ignition does not use side cuts and instead uses the 9 conventional cuts.

For the rest of the ‘How to Site Read a VAG Laser Key’ guide, please go to CKL edition 2.