Q.I need to programme a chip to a 2010 MK6 Golf. I will use SuperVAG and Tango to programme the chip to the clockset. I have both a standard ID48 Chip and an ID48 emulator chip. Which one should I use?

Why is it beneficial to use an emulator chip you ask? As an emulator chip can take on the identity of one of the cars existing dealer supplied keys, it means that the main dealer, when scanning this key will see that the key does indeed show up on their dealer VAS system (as it is the same ID as the key supplied by them). So in theory, when they attempt to recode the key they will not shut down the dashboard and clocks as they do when attempting to code in an aftermarket key with an ID that doesn’t appear on their system. This prevents future compensation claims from customers who have fallen foul of a big bill when a dealer attempts to code in an aftermarket key and doesn’t turn to the locksmith for compensation.

The other benefit is the coding process is quicker and simpler and doesn’t involve altering the vehicles dump file in any way.

The only downside is in the stolen key situation; when keys are stolen the customer will not want them to still be able to start the car for obvious reasons. But, if we have used the emulator to clone an existing keys ID, and the key we emulated is the stolen key, then both your new key and the stolen key will still work the car, thus leave the car at risk from whoever has the stolen key. For us it’s a balancing act; do we risk litigation if we have added a new key and deleted the missing keys when a dealer shuts down the dash trying to recode it? Or do we emulate an existing key to avoid this possible litigation; but then in a stolen key situation, realise the car is still at risk to the thief with the stolen key.

Only you, the user can decide this based on the job in front of you. I.e. is it a stolen key, is it just lost keys or is it broken keys etc. The best advice is to judge each job in its own rite.

Q.I had to walk away from a Ford Kuga as my HU101 tool would not go in far enough as I couldn’t feel all 10 wafers - is this a different lock and is there a tool for it yet?

Your existing tool works fine on the Ford Kuga; the Kuga is the same HU101 lock as all Fords with the difference being it only has 7 wafers in it and not the 10 you expected to find. You will only feel wafers in positions 3 to 9 on the tool as the lock has no wafers in positions 1, 2 and 10.

I am having problems picking and decoding my Nissan Juke 2012 with my Lishi 2in1, I can’t feel wafers in all the positions?

If you’re using the old NSN14 2in1 you won’t pick up all 8 positions in the door lock due to a lock modification on the Juke and some other late model Nissans (like the NV200 etc.) You need the newer 3in1 NSN14 tool which is modified to work on these newer locks - you will then pick and decode these with ease. 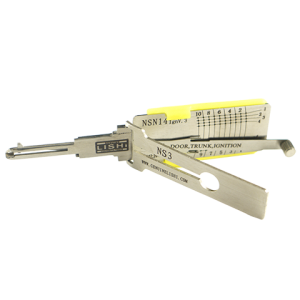 Q.I’m struggling on a Peugeot 207, 2007 year. The key programs fine and the engine starts but I can’t get the remote to work at all. I’ve done loads of these with no issue in the past but can’t get this one to work. The original key works fine though so I know the system is ok; I’ve tried 2 different new keys with the same result, the remote won’t work.

If you have both in stock, check what system is fitted. Or if it’s a spare, check if the customers’ existing remote is JCAE or Delphi - a quick look under battery cover confirms this which is which.

An alternative to burning keys is to use the KD900 NB PSA remotes and generate the correct remote needed - this way doesn’t burn keys as a key can be rewritten if the wrong one is selected.

Q.I programmed an Astra J vehicle and the security light stayed on and didn’t clear. The engine ran fine and the remote worked but the padlock light stays on. I tried clearing the fault codes but it still stays on - is there a way to clear this?

A. You haven’t done anything wrong - this happens a lot and there is nothing to worry about. After around 6 miles or around an hour of driving it will go out on its own; however, we don’t like leaving lights on as it’s unprofessional. A simple fix is to remove the key from the ignition and then disconnect the negative lead from the cars battery for 5 seconds. Reconnect and try the key - the light will now go off as it should.

Q.I had a 2016 Audi A4 with a 10 cut VAG lock on it. I couldn’t get full insertion due to the tool getting jammed on the handle set, is this normal?

A. On the latest A4, Audi have recessed the lock a considerable distance. The initial tool is fine on all the others, but this one is new and is obviously done to defeat Lishi tools. A new version of the 10 cut tool is in development with this lock in mind, and once released will be backwards compatible to the rest too. A smaller diameter stabilising ring is being added with an amended handle design to overcome this.

Q.Do you know if Truecode will program the Corsa E as it is not listed?

A. If not listed then the official answer is no. But, I have had success on a number of Corsa E models programming them as an Astra j - which hasn’t let me down yet. But it’s worth noting that if you do attempt this then you will be doing so on your own back. If it’s not listed by the manufacturer it won’t be covered for support. However I must say it’s worked for me so far.

Q.I went to a Renault Modus 2011 and I couldn’t get communication with the car at all - can you help?

A. Some of the late Modus and Clio models suffer this. Simply switch on the hazard lights and try again, this time you should get comms.

Q.I went to a job on a 2013 Berlingo and found that my VA2 2in1 wouldn’t pick up all of the wafers - am I doing something wrong?

A. It is likely you have an older version of the 2in1 tool. Both Peugeot and Citroen narrowed down the face cap on the newer models; this prevents the tool from fully inserting into the lock as the 1st shoulder snags. The latest VA2 tool has been modified to do these locks with ease. If you have the VA6 4 lift tool this will pick the VA2 lock in the new Berlingo but won’t decode them as it is a different grid.

Q.I’ve tried to pick a Citroen DS3 lock fitted which was fitted with the VA2 lock. But, my pick will only pick up 5 of the 6 wafers and I can’t get it open - is my pick faulty?

A. No the pick is not faulty - you just have an older version of it. The newer V2 3in1 tool is required as the one you have isn’t getting full entry into the lock. They introduced this lock to DS3 and to the later Berlingo models amongst others, and the early tools were then modified to deal with the new locks released. Both The VA6 4 lifter and the VA2 tool were modified once these new locks were released, so to successfully pick and decode these new locks you need the latest versions of VA2 and VA6 tools to defeat them.